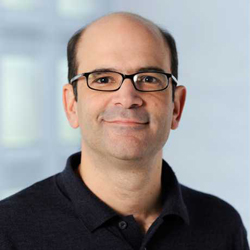 Erick M. Carreira has been full Professor at the Organic Chemistry Laboratory of the ETH Zurich since August 1998.
Professor Carreira was born in Havana, Cuba in 1963. He obtained a B.S. degree in 1984 from the University of Illinois at Urbana-​Champaign under the supervision of Scott E. Denmark and a Ph.D. degree in 1990 from Harvard University under the supervision of David A. Evans. After carrying out postdoctoral work with Peter Dervan at the California Institute of Technology through late 1992, he joined the faculty at the same institution as an assistant professor of chemistry and subsequently was promoted to the rank of associate professor of chemistry in the Spring of 1996, and full Professor in Spring 1997. He is the recipient of the American Chemical Society Award in Pure Chemistry, Nobel Laureate Signature Award, Fresenius Award, a David and Lucile Packard Foundation Fellowship in Science, Alfred P. Sloan Fellowship, Camille and Henry Dreyfus Teacher Scholar Award, Merck Young Investigator Award, Eli Lilly Young Investigator Award, Pfizer Research Award, National Science Foundation CAREER Award, Arnold and Mabel Beckman Young Investigator Award, and a Camille and Henry Dreyfus New Faculty Award. He is also the recipient of the Associated Students of the California Institute of Technology Annual Award in Teaching and a Richard M. Badger Award in Teaching.

By continuing to browse the site you are agreeing to our use of cookies.